The address of the house is Via Cesare Battisti 22, Acquaseria, San Siro 22010 (CO)
It does not appear on google maps because it is not passable by vehicles. However, we have a pin for Il Campanello so you should be able to find the position of the house that way.  If you are using GPS, navigate to Parcheggio, Strada della Ligussa.  This is the address google maps uses for the car park:
Str. della Ligussa, 5, 22010 Acquaseria CO, Italy 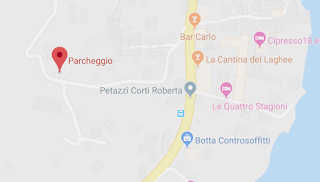 Leave the motorway at Lugano and follow signs for Gandria.  You will skirt around Lugano City and then climb to take the lake road. This is a lovely stretch and you can either take the tunnel or stay on the lakeside road. You will probably be waved through easily at customs, but do make to stop.

Turn left at Porlezza and head for Menaggio. There is a big Iperal supermarket just past Porlezza, so if you want to do a big shop we recommend a stop here.

Descend towards Menaggio with several hairpin bends but turn left at the roundabout following signs for Sondrio. This puts you on the road into Acquaseria (see below*). Turn left opposite Bar Carlo.

Follow signs to Milano until you reach the A8/E62 motorway. You have a choice of going straight on, on the Pedemontana toll motorway, or follow sign towards Milan for a few miles and then take the exit onto the A9/E35 for Como.  There is one toll on this road - about €2.20.

Go past the turnoff for Como Sud, and past the turnoff for Como Monte Olimpino.  You will be high up and it will seem like you are moving away from the lake, but don’t worry.  Come off at the exit for Lago di Como, just after a tunnel.  Go downhill to a traffic island then sharp left to merge up a ramp onto the SS340, which is the main road up the lake.  Signposted Menaggio, Colico, San Moritz.  You will go straight into another tunnel.

The SS340 to Acquaseria takes about 45 minutes.  Bypass Menaggio through two tunnels.  Then there are some short tunnels and you come out into San Siro/Acquaseria village*.   Over the last tunnel you see a sign saying ‘Attenzione: zona abitata al fine galleria’.  Turn left opposite Bar Carlo. Follow the road bearing right up the hill to the small car park by the bridge.

Take the road from Bergamo to Lecco. Just south of Lecco city you will join the highway SS36 that goes up the eastern side of Lake Como north towards Colico.

You will pass through a couple of tunnels, and then emerge with the lake to your left. After a few km you will see sign for Varenna and ferry (traghetto), with a filter road off to the right. Note that there is a layby before this turnoff so don’t get panicked and turn into the layby.

Following signs for Varenna you will pass Abbadia and then Mandello del Lario (if you need a quick stop there is a little park down on the lakeside). Then on to Varenna. Go through the top end of the village following signs for the ferry. Take the car ferry to Menaggio.

From the ferry, turn right onto the road and bear right at the traffic lights, keeping the Banca Intesa San Paolo to your left. Then keep straight. You will pass a big church on your left where the steps come right down to the road. You will go out of Menaggio through an old tunnel into Nobiallo. After Nobiallo the road filters on to the highway. After some short tunnels you come out into San Siro/Acquaseria village. Over the last tunnel you see a sign saying ‘Attenzione: zona abitata al fine galleria’.

The road bends left slightly and you are in the village.  Turn left opposite Bar Carlo. Follow the road bearing right up the hill to the small car park by the bridge.

Driving from Bergamo Airport – round the lake

An alternative to taking the ferry (cheaper and often just as quick). Stay on the SS36 as far as Colico, at the northern end of the lake. Follow signs now for Sorico and Menaggio. You will pass a big shopping centre on your right and a slightly complicated interchange that makes you double back on yourself.

You will cross over the river Adda. After the river take the left turn at the roundabout, signposted Menaggio. Crossing the river Mera the road bends to the left and then follows the lake down to San Siro/Acquaseria. Turn right opposite Bar Carlo.  Follow the road bearing right up the hill to the small car park by the bridge.

By train and bus from Bergamo

Take the bus from Bergamo Station to the railway station (Bergamo FS). Buy ticket through to Colico or the one-week pass 'Io Viaggio Ovunque in Lombardia'. From Colico catch the C10 bus and get off at the second Acquaseria stop, just after Bar Carlo on your left. Take the road opposite Bar Carlo up the hill to the little car park.  Do research timetables first!

By train and bus from Milan Malpensa

Buy a ticket at the airport station through to Como. Take the Malpensa Express but get off at Milan Porta Garibaldi, as more Como trains go from here than Centrale. Take a train to Como-Chiasso and get off at Como San Giovanni. Take the C10 bus to Acquaseria.
By bus from Como station
Buy your bus tickets either from the bar or from the newsstand at the station. The C10 bus stop is outside the station. The bus will be for Colico or Menaggio. This is a scenic bus ride which gives great views so do sit on the right side if you can.  Ask the driver to stop at Acquaseria.  The ride will take just under an hour.  You may need to change buses at Menaggio because often the driver changes shift here.  See the driving route above for info about coming into Acquaseria. Get off at the first bus stop in the village and walk a little way till you get to Bar Carlo. Then cross the road and follow the directions as if you are driving (as above). Follow the road bearing right up the hill to the small car park by the bridge.